"Even this horse will founder backward
to coin, cannon, and domestic pots..."
-Kay Ryan, 'All Shall Be Restored'


The worst is how recombinant this
Wisdom is and it is

And it defeathers and it's reluctant,

And--open a window,
It's reluctant!--
And if I was just a fun patch of elbows I'd
Roll in the field, like that
Giant recreational ball in Spain
People pay money to ride
Wearing pads and cameras
Rolling,

Which of course costs nothing
To the ball and field.

This includes complimentary light and its swift
Pollinated angles. 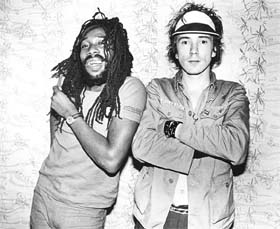 This started as a status update on Facebook, which is a horrible thing to admit.

I was driving my roommate's car to work this morning when the Aerosmith song "Rag Doll" came on the radio. I left my body and traveled over the heads of all those souls to whom this shit was being marketed. From above I could see the wear marks, how at first they resisted, then grew weary, and wearier still, finally arriving at a broken state half surrender, half hypnosis. The song is about a rag doll who lives "in the movies" and does other things. There's a sexual undercurrent and a sense of narrative empowerment fleshed out in the phrase "Yes I'm movin'/I'm really movin." I ended up so far beyond where I needed to be, probably just trying to escape that condescending smother pattern of car ad-car ad-Aerosmith ad-car ad-car-car ad.

And I thought about what I loved, how to my way of thinking it was different, and that if I belonged to the other world, the one below, I would probably not mind so much being that one generally takes the intellectual and empiricial tenor of his own being as a point of limited pliability.

When I got home I decided to try out an exercise in meditation. Donning an old motorcycle helmet left in the hallway by the last tenant and a pair old shop class safety goggles blacked out with electrical tape I began running headlong at the kitchen wall, repeatedly, listening to Big Youth. The idea was to replicate, not merely in the corners and depths of my body, but in a deeper state of being that wild, comical expression he uses that goes something like:


The group had arrived at the three week-marker of Mike's bachelor party when I just sorta snapped into an incredible wild peace.

I don't know which of big Bill's sorrows are sweeter, that this party's over or that I can't use the light as an excuse any longer--with a straight face. I sounded like a douche when I tried to talk--just never quite got the tone right, but also, in my defense and in defense of that peace through which some hue of self-love must have run--without the screeching din of narcissism for once--never quite got that 'shut up dummy' self-incrimination blue. Line of the evening came in Mike's puzzling over an old girlfriend, saying he couldn't believe they ever had sex because they were so bone-skinny that their hips colliding must've sounded like someone "banging together two tea cups". Later I tried to pass along some mac & cheese to foxy girls at The Castel but what came out was a bunch of leery words coated too thickly in vomit and too thinly in platonic diplomacy to not earn a slap in the face. How did I not get slapped in the face. Maybe I got slapped in the face. Also I think we watched Steel Magnolias.

Anyhow I awoke in a fugue moment, with a hot cup of coffee in one hand, re-reading a favorite old New York Times article, this one on the notorious pianist/fraud, Joyce Hatto. Regaining my wits I showered and, in dressing, discovered the distilled essence of my baseness: I refuse to spend a few bucks at a drug store for a sewing kit to mend up the hole in my shorts out of which my dick keeps falling at inappropriate times.

But I'm not gonna let myself get all bent out of shape over it. Please pardon all ensuing and prior instances of blurting nudity. I'd truthfully do the same for you.
Posted by Bryan at 3:13 PM No comments:

Nothing to be done.

I got myself good and superbly drunk the other night, hanging out with Crystal. It was late and she didn't want to get a ride with the guy she came with. She spent the walk home asking me why this guy (a different guy) wouldn't come around, and I pretty much asked her the same thing about a girl. In the end it was just a lot of me telling her that she's pretty and everything---which she is, I wasn't lying. But there was this one great moment when she dumped her bag on Brereton because she'd lost her keys. We went back to Gooski's, to where she had been sitting and the tall Italian dude who looked like Max Von Sydow and definitely had a neat design mapped out for himself and her and didn't like me on account of it was still sitting there, grousing about it. She poked her head in the door and in her apologetic voice, which come to think about it she has an apologetic voice all around, said, "I'm just looking for my keys." I poked in because I just wanted to see the gang again and it just seemed kind of funny. Besides I'm sure it burned that dude up pretty bad. What a dump.
Posted by Bryan at 5:07 AM No comments: