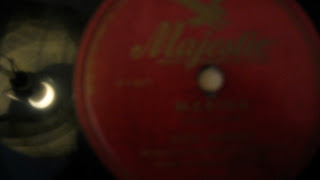 Gotta say, this time I prefer the cd to the 78. It's just older.

The sterling El label put a lot of Dick Farney's records out on a single cd last year, aptly titled The Eternally Stylish Dick Farney. Which is fantastic, because I'd never heard of him.

My ear's been bending these days in the direction of Dick Haymes, Dean Martin, and all the AM radio honeydrippers relegated to antiques malls and sleepy bookstores at the shore, bountiful stuff in flea markets and the cheapo piles at the busiest of used record outlets. Farney, a Brazilian singer popular in the 1940's, fresh from aspirations of a recital piano career, had a startling, quiet voice that, in keeping with a Hollywood formula of the day, drew women like zombies to his heart--often below a saturatedly white moon. He was the antecedent of Joao Gilberto, the man who joined the hands of Luis Bonfa and Antonio Carlos Jobim, so they say.

And they say its a trick certain evil men know, a way to speak low so as to lure curious prey closer. George Sanders and a few others less remarkable did it with success while maintaining the darkness.

Dick Farney fit right in with the pop vocalist crowd; his willfully seductive delivery counted on many a teenage boy's and girl's exotic notions of a Latin Pied Piper. Or a least his manager counted on them.

This 78 copy of "Marina", my unparalleled favorite of Farney's songbook, arrived at the office on Friday--a scant three weeks overdue. It was exquisitely packaged--I'm compelled to say--and the Baptist leaflet with the pic of the Twin Towers ablaze on the cover, included in the parcel, clarified maybe why the quality of the object wasn't better, or more accurately described, on eBay.

In a reverie I imagine a slightly tanner, aloof Barry Corbin, rising from an online Texas Hold 'Em chatroom (the cards have topless girls!), glancing down at his Dick Farney 78/beercoaster and concluding, "Everything my mama graced was perfect".

Wouldn't you know that I was the jackass with blinders on who rose with paddle in hand to proclaim, "Sold!"

Jesus, it's a pretty song.

And the deluge of stylus-ravaged noise tells me someone's mama had a great many satisfying daydreams in the meandering winds that separate Brazil from her bedroom. If I close my eyes I can see the chair.

The recording (for the Majestic label, probably early 50's) is from a later session than the one I took to on the El label cd (40's?) Or maybe it was just the American market recording. Whatever the circumstances, the drowsy piano was switched out for a Nelson Riddle style orchestral arrangement, which is fitting since Farney borrowed his share of sugarcubes from Sinatra. A real flesh human, this Dick Farney. And that guyish flawed quality made the swelling, votive-dappled nocturamas upon which he relied that much more compelling.

Still, the "Marina" I had very much come to love--like maybe all music of late I've come to love, derived of Shaker basics, rendered in piano, voice and nothing else. I picture even the rain being ushered from the studio with a condescending word. Too much pomp and circumstance, the engineer would've said. What a joker, the rain. Which gives me good pause. I'll save this one for a storm.
Posted by Bryan at 2:46 AM