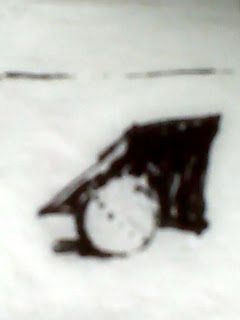 There is no revenge even half as strong as the Light:
But there are surprises.
This one is hooded by the sour grace of compromise, by twilight hooded and in plain jeans, and
Fed on immigrant food.
The Curse digs its plots on our limelined
Field.  Tomorrow we arrive, the heat of memory a furnace blowing white.
Even the devil has a tender letter in his pocket in case he is found.  Or maybe, especially the devil has.
Posted by Bryan at 6:01 PM 1 comment:

What is there to say about the day that wasn't said by just living through it.  Yesterday was beyond the brushes, beyond the best words.  I owe it to posterity to say the lesson was duly learned not to double down on a bag of Hopi mushrooms when the first round of Lucky Charms is circling the drain.  Maybe I should've opted for a nap and a salad.  A long walk.  Prayer.  I pulled through and all internal organs meet the dummy class test;  they are operational, I am alive.
Howler's.  Last Night.
It was a great show with friends and neighbors, Dark Lingo, who don't so much sound like, but very much evoke the shambolic domestic dynamism of Royal Trux.  They are an awesome force to behold, tribal and funny--without ever being noodly and silly.  There is an obscure density to their music, and yet, the couple's personalities play clear and magnetic through their music:  It is a sincere hope that they'll wind up at the great Brickbat Books in Philadelphia someday to underscore my sincerest claim that the Pittsburgh live scene is formidable--and that DL embodies the best elements of it.  The Burndowns, another local blast--and heldover admiration from my blogroll (frontman Steve Anderson is the voice of 7" Slam, a blog that gets written far too infrequently), followed.  One thing I love about Pittsburgh is how expertly--and uncannily in unison, this live climate ferrets out fashionable acts, trends that squat on the crests of waves, dudes in skin tight broomstick-leg jeans, and "little black glasses" as Lingo's Nick nails it.  The Burndowns make fantastic and superbly clear, unfussy punk rock.  When rock and roll of any variety works it does so by untethering its own energies from the past, without denying its debt.  The Burndowns made my head ring, and on the brief walk home (which is to say I had only to cross the street) I earmarked Stiff Little Fingers, Jerry Lee Lewis, the first Clash record, The Sonics and inexplicably, Tony Conrad, for the week to come.  With both Dark Lingo and The Burndowns what excited me most--and maybe this is a compliment owed to the music community on the whole as, at this moment, I can think of no egregious exceptions, is that I have such a thin stylistic connection to what any one of them does.  I don't dress like them, the music I listen to day-by-day sounds nothing like theirs.    But the connections they foster are electric, instant and halcyonic.
I sacked out on the couch with the dog, saw the first half hour of the Rouben Mamoulian version of Dr. Jekyll & Mr. Hyde from 1931 and passed out before the young, itinerant Frederic March succumbed to his own nocturnal chemistries.  When I left him our night was dignified and intact.  We'd been seduced by it, but were--at least when I went to sleep, mannerly and human.
Posted by Bryan at 1:40 AM No comments:

The glory of mine eyes.

Jenna Kantor (American recent)
Over the last few months I've noticed an interest among critics in the works great artists generated as, or just before, they died.  There was this New York Times 'Science' section feature, a wrenching look at the geriatric Impressionists whose collective zeitgeist for dappling color resonance turned out to know no tougher a mortal adversary than cataracts and the poor state of surgery in the early 20th century.  Then there was Roberta Smith's survey of the final act Picasso exhibition at the Gagosian Gallery--it's a weirdly human coda to a career that often buoyed on fantastic stylisms and extraterrestrial concepts of basic things. Looking at the pictures (Times Online offers an audio tour narrated by Ms. Smith ) the viewer is left with a reverent sense for an artist who arrived at his own naked humanity in the eleventh hour.  The myriad devices which defined Picasso's career meet with suggestions of failing senses, spiritual fatigue--even doubt, and an overarching technical approach that just looks less constrained by gravitational pesterings.
I've always enjoyed this final sobriety in peak works: Mahler's 9th Symphony, Kafka's aphorisms from Zurich--even his never-to-be-completed The Castle, Nick Drake's Pink Moon, Sebald's careening pseudo-memoir novel, a few short years out from his demise, Austerlitz; we like to think we're seeing more of the artist as he nears the end.  I suspect it's not that we see anything else than normal, nor is the artist's labor any different.  The subject is now just more provocative.  It's more vital, and entirely inclusive.  If only momentarily everyone lives with that fraught set of concerns.  I tell you, as largely indifferent as I've grown to Picasso, there were connections I formed, looking at the Times article, that made me not just reevaluate his labors, they made me reconsider my own.
If there is decency of expression, one could say,  and possibility in every response then why refrain any longer?  How shit-biting sad it must be to arrive and then think
I wasn't always a desperate person with just sheets to fill.
David Berman, a poet and musician whose sentiments I've tacked up here frequently over the years--he's the Silver Jews guy, wrote a poem about Isaac Asimov's death.  There is a lot of sympathy and in it--mostly devoted to a guy whose only public faults were that he dreamed of different worlds and that he was abnormally prolific.  One line in particular resonates:
Perhaps my last words will be random.
Posted by Bryan at 5:45 AM No comments: