This must be that dream. 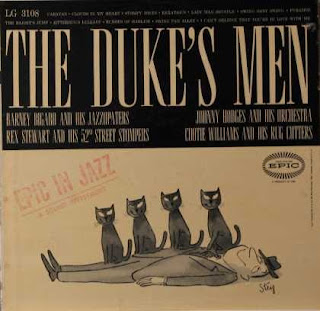 William Steig-The Duke's Men-album cover (American 1938)
The cover art you may recognize as that of William Steig, late American cartoonist best known for his New Yorker comics.  In some instances, but not this, it is appropriate to not judge a book by its cover.  Not in this case because before we hear Barney Bigard and His Jazzopaters generate in flame and melody a fantastic "Caravan"--and I hear way more bad versions of this than good, you come to this lovely image.  I guess the idea is this poor guy is down and dreaming on account of the wise cats--Duke's Men.  Incidentally the other three (in case the image proves difficult to read) are Johnny Hodges, Rex Stewart and Cootie Williams.
Now I hate those euphoric white guy ruminations on the auld lang syne as much as the next, er, euphoric white guy.  So let's us make a promise to one another:  humor me in these final moments of a birthday hangover which pathetically involved a mere 4 beers, and maybe one tallish whiskey, and I'll keep it short.
And I get to keep the name...
Why do so few artists try to approximate their dreams anymore?  Or worse still they forget what's appealing in them and become unctuously psychedelic--in my heart I believe this is why, if only intuitively, Charles Mingus avoided fusion jazz; those Miles Davis records from the late 60's and early 70's sound like they were made in a White Castle dumpster--greasy, littered with sticky debris, and redolent of all the ugliest aspects of the human appetite.  Dogshit.
I don't mean to say this collection of Ellingtonia, made under the direction of these four famous sidemen throughout the late 30's, is clean by contrast.  There is good luridness in the geometric city-soul of "Echoes of Harlem" (imagine a "Tijuana Bible" designed by Piet Mondrain...), led by Cootie Williams; the aforementioned "Caravan", with its loping canteen exotica , and Williams' high-moaning brass coils is anything but fit for tender ears.
It's made all the more subversive by that innocent picture of a prone man, overwhelmed by grinning cats, whose knowing eyes address the stars with corkscrewing dirtymindedness.  The contents of that dream...
Posted by Bryan at 1:57 PM