The delicate taxonomy of the sabbath. 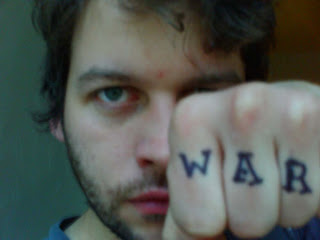 So the last time we had one of these I was hooting and raising high the neighboring Mummers' roofbeams for the Curtain from Two Street.  Miss Kate came home to an apartment redolent of mostarda and spare ribs, PBR and hoarse enigmatic victory.  That's in the past.  Back in August I cleaned the place, thawing the last of  some mustard and honey drenched pork belly, ate it (unwisely) and left our keys by the stove.
Already today I feel a Noahic flood of loud strong sentiments, and have been assured--both in whisper campaigns and in the pre-order tickets fattening my wallet, that I'll sell more wings than Boeing at Gooski's tonight.  I have a picture of the crowd in my head.  A lot of the regulars who have been bellied up for every game.  When we were down they would clear the bar to enhance the flow of positive energy.  One would ask for a glass bottle of Heinz ketchup.  It stands for Pittsburgh, homophonous with the wide receiver, number 86--the MVP the last time we found ourselves in this position.
Ideally it'll echo the AFC game. I'll wipe the honey and olive oil on my pants and play Primal Scream's 'Movin On Up' on the jukebox.  The scene will recall the land dispute early in Speak, Memory when, once solved, Nabokov's idealized father was flung from the landworkers' rejoicing arms into the sky like a hero.  I try to tell myself none of this means anything.  When Obama won Carl asked, does this really mean anything.
Christ, how should I know.  GO STEELERS!
Posted by Bryan at 3:32 PM