ED fROM OHIO SIGNED THE DECLARATION OF INDEPENDENCE. 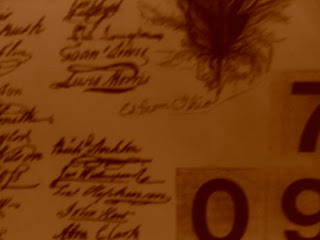 I was thinking the other day about knowing when to stop:  Cooking, paintings and even these little memoirs, have shown me so readily how a late regret can materialize unannounced, and irreversible.  I know immediately I went too far.  If I had laid the brush down, not introduced red, killed the heat, undoubled the metaphor, perhaps it would have been perfect.
What reminded me of it was a poem by Leonard Cohen--actually I think it first appeared as a song on his Recent Songs album, but I only know the poem.
I came so far for beauty
I left so much behind:
my patience and my family,
my masterpiece unsigned
There have been days when I was so in love with a handmade thing (lately it has been a series of absurd show flyers papering Gooski's) that I felt with authorial certainty in bursts human artifice was superior to nature.  It wasn't til I begrudgingly recalled the discipline I'd alternately neglected and lost that I realized I had been wrong.  Not in the superiority of handmade things, rather the sacredness and the accidental way I came to the Hill.
Posted by Bryan at 9:57 PM